Do you ever look round on your street and think ‘I’d really like to do something about that?’ So did local resident Kim when it came to a few plants on a patch of ground near her house…

“I first did something to this strip of garden because it looked so awful after the weeds had been sprayed, and it became a baked patch of dirt that quickly turned to mud when it rained, that was in 2018. I weeded it and planted it with plants gleaned from my garden and the half-dead reductions from the Co-op.

I have returned to it more this year because I think the pandemic has changed people’s attitude to green spaces, and I thought if I had the backing of the street the space might be treated with a little more respect. There is still a lot to do but the plan is to get everyone involved next year, I have just run out of time this year.”

She sent her street a Whatsapp message: “Hello everyone, I have put this post together to ask if you would support a move to adopt the small strip of ground just inside the Waterloo Rd entrance to the park as a Pollinator Patch with flowers and grasses that benefit bees, butterflies, beetles… my mind is running over with ideas but I am sure you will have loads too (growing seedlings, planting, painting pebbles, designing a sign, bee counting events…stuff children of all ages can do).”

One of the main reasons she did this was because in the pandemic many people were isolated and this was a way people of all ages could come together nearby in their area.

So far, her neighbours have supported the idea by offering to help, staying in touch, suggesting ideas and donating plants.

Could you do something similar in your neighbourhood? Get in touch with your local Community Builder if you would like to have a chat about an idea you’ve had. 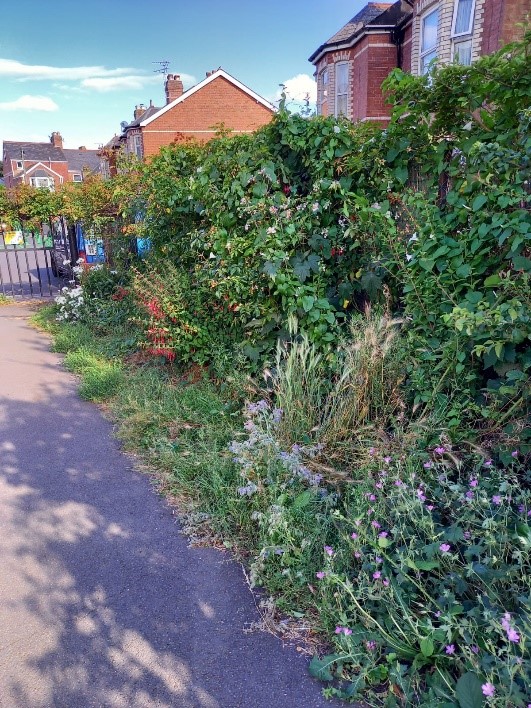